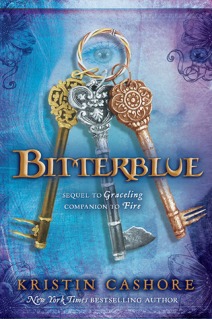 Eight years after Graceling, Bitterblue is now queen of Monsea. But the influence of her father, a violent psychopath with mind-altering abilities, lives on. Her advisors, who have run things since Leck died, believe in a forward-thinking plan: Pardon all who committed terrible acts under Leck’s reign, and forget anything bad ever happened. But when Bitterblue begins sneaking outside the castle–disguised and alone–to walk the streets of her own city, she starts realizing that the kingdom has been under the thirty-five-year spell of a madman, and the only way to move forward is to revisit the past.Two thieves, who only steal what has already been stolen, change her life forever. They hold a key to the truth of Leck’s reign. And one of them, with an extreme skill called a Grace that he hasn’t yet identified, holds a key to her heart.

I really, really wanted to like this book, I truly did.  I LOVED Graceling.  It was the book that started my love affair with YA fiction not too long ago.  Then I read the sequel, Fire, and was not impressed.  But I loved the character Bitterblue enough in the first book, and respected Cashore’s writing, to at least finish the series.

In the last of the trilogy, we find Bitterblue, now on the cusp of womanhood, in full reign of her kingdom, but still trying to overcome the grasp that her father has held on the kingdom, and her, for so many years.  Is there conflict, yes.  Are there great characters, yes.  Do we feel for Bitterblue and her plight, yes.

Cashore does a great job building up the past and how horrible King Leck was, but the conflict – now, in the present – never seems immediate enough.  I never felt like Bitterblue was in any real danger.  Because of this, I had to keep reminding myself that she was actually in her late teens, and not the same small child I had read about in the first book.  The conflict from her father in the past is strong enough to be real, but it just doesn’t work for me.  Cashore is never able to bring any real urgency.

Why?  One of the reasons is because the characters in the book (which are plenty) are stiffled inside the castle.  The majority of the book (the VAST majority of the book) takes place inside the castle.  There was a moment towards the beginning where Bitterblue wants to get out and explore the city, meeting new people, learning of secret plots, and it really helped the story move along.  The introduction of Saf as the love interest and mysterious rogue worked for me, but just when it was moving forward and I felt a little breathing room, everything moves right back into the castle.  So many characters crammed into the confines of the same space got crowded.  I think Cashore had a hard time as well trying to figure out what to do with them.  Saf, the one character I wanted to know more about, almost became a byword for the second half of the novel, with no real relationship built up between him and Bitterblue.  What gives!?!?

Maybe it was just too much.  The book did NOT need to be 500 pages long.  Cashore has a wonderful, witty dialogue with characters that came out in this book, that was enjoyable, but over time became unimportant because I lost track why I was reading.  At the end of the day it was a good book, worthy of the time.  I understand Bitterblue’s motives and what she is trying to accomplish.  There was resolution, I just don’t agree with the plot and storyline that Cashore chose to bring it about.

Have you read ‘Bitterblue’?  What did you think?