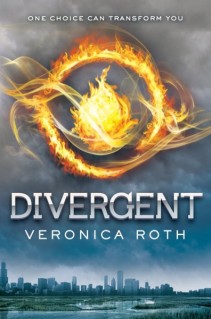 In Beatrice Prior’s dystopian Chicago world, society is divided into five factions, each dedicated to the cultivation of a particular virtue–Candor (the honest), Abnegation (the selfless), Dauntless (the brave), Amity (the peaceful), and Erudite (the intelligent). On an appointed day of every year, all sixteen-year-olds must select the faction to which they will devote the rest of their lives. For Beatrice, the decision is between staying with her family and being who she really is–she can’t have both. So she makes a choice that surprises everyone, including herself.During the highly competitive initiation that follows, Beatrice renames herself Tris and struggles alongside her fellow initiates to live out the choice they have made. Together they must undergo extreme physical tests of endurance and intense psychological simulations, some with devastating consequences. As initiation transforms them all, Tris must determine who her friends really are–and where, exactly, a romance with a sometimes fascinating, sometimes exasperating boy fits into the life she’s chosen. But Tris also has a secret, one she’s kept hidden from everyone because she’s been warned it can mean death. And as she discovers unrest and growing conflict that threaten to unravel her seemingly perfect society, she also learns that her secret might help her save those she loves . . . or it might destroy her.

I finally read this book.  Everyone said I needed to; people in my critique group, everyone on Goodreads, and even my wife (who loved it).

What I enjoyed most…

The story certainly kept me turning the pages.  It was fast paced action and the plot kept moving forward.  I also enjoyed Tris (for the most part) and thought her actions and motivations were realistic.  I felt for her and wanted her to succeed.

I also enjoyed the writing style and it pulled me in.  I usually don’t enjoy 1st person – at least not 1st person in the last 10 years or so.  There is something about the constant inner focus that I have a hard time with.  It’s supposed to help me become more connected to the character, but usually it just pushes me away.  However, I enjoyed the flow and style that Roth employed…it did not turn me away.  She was able to focus on Tris, without being completely overwhelming.

What I thought was okay…

I thought the author did a good job with the love interest – Four – and the relationship built with Tris.  It was semi-believable for me and I thought it progressed naturally.  However, Four seemed a little too withdrawn at times.

Also with the book, especially after the reviews I had read/heard, I was expecting more substance.  It’s certainly more plot driven than character driven (at least for me).  I didn’t get connected to the characters as much as I would have liked to.

There is a twist with Tris’ mom that plays a very key role and it was okay, but I wanted more.  There wasn’t a lot of relationship building or emotional moments with Tris and her parents.

What I thoroughly disliked about the book…

I cannot say enough about the world building…which was almost non-existent.  I wanted to get so lost in this world, but I couldn’t, because it wasn’t there.  I don’t remember enjoying a book so much where I didn’t have a clue what anything looked like.

I also had a hard time with Eric, the main baddy in the book.  He is a great character and a pretty mean guy in the first half of the book, but by the second half he has calmed down slightly and is more reserved…almost like a different person.  The only problem is there was no explanation for the shift.

Do I agree with everyone who heaps praise saying ‘this is the best book/series since Hunger Games’?  Well, I don’t know, since I still haven’t read hunger games;-)  So while it was good, I don’t think I can put it into the ‘awesome’ category…not yet anyway.   In my heart I wanted to give the book a 3.5, but because it kept me involved and entertained, I bumped it up to a 4.

Have you read ‘Divergent’?  What did you think?